Last Sunday, I had the good fortune to have a day on my own on one of those remarkable California January days where everyone wears shorts and acts like it’s July. Seriously, I saw a guy strip down to his undies and lay out to tan on the grass by Lake Merritt. Lake Merritt is in the middle of downtown Oakland! But dudes, it was hecka nice. The weather. Not his buns. Well… I tried not to stare.

I took BART over to Oakland, which, in itself is great for arting, because nearly all people on BART are either sleeping or looking at their phones. The few people who do notice I am drawing people seem to find it amusing. I think they are secretly wishing someone was drawing them. 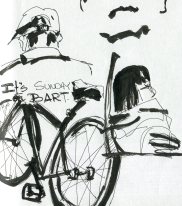 Once there, I wandered in the general direction of the Oakland Museum of California, which was my official destination. I crossed the street on 12th and happened to see a pretty decent view of the Tribune building. I’ve admired it from the freeway for years always thinking I’ll get down here someday and find a good spot to sketch it. And there it was! So I stopped and stood on the sidewalk and sketched the view while listening to the ranting sermon of a wackadoo who suggests that if women are allowed to speak at your church, YOU NEED TO FIND A NEW CHURCH! And some other stuff too vulgar to repeat on the internet. But he was all the way on the other side of the street, so it was cool. Everyone’s entitled to their own opinion.

Eventually I ended up at the museum. Looking around at the always inspiring artwork of Frida Kahlo, I saw a quote on the wall of the late David Gilhooly that I had to write down:  “After all, why does an artist work…” That’s how long I had my pen out before one of the ninja art guards came over to inform me that only pencils are allowed. Sigh. Luckily, I had a pencil. “…but to amuse himself,” I finished writing the quote. I hate getting in trouble. All flustered, I continued. I did a quick sketch of the view out the cafeteria window where I had an awesome Manchego and Niman Ranch ham panini. I considered getting out my watercolors, but feared more interaction with the museum police. I completed my museum tour in the natural history section and found a raven to sketch. In pencil.

By then, the weather was getting spectacular, so I walked to Lake Merritt. I sat in the pillowy grass and painted the Tribune sketch. I pondered what else needed sketching, and decided that my bag was far too heavy to keep walking. I headed back to BART and sketched more people on the way home. I love when just a few hours feels like a whole vacation.

One thought on “Work to amuse yourself.”